Chapter 6 - Back to the Front, Wounded Again, War Ends

By 11 April, the British situation was desperate; it was on this day that Haig issued his famous “backs to the wall” order.

Not long and back to France, along that beautiful river to Rouen. We slept in tent, the first night the Germans bombed the next tent to ours killing all the occupants, men who had never even seen the trenches.

Always being a devout person, Rouen and its “red lamps” and naked women disgusted me.

The Brigade now being badly understrength was rejoined at Ypres. What a reunion! Knee deep in mud, the duckboards swimming on the water, one had to keep in the trenches in the daytime for cover. One had to use dead bodies for stepping stones. Unbelievable but true.

The Brigade had spells at Bapaume, Dunkerque, and Perrone then on to Gouzencourt (Gommecourt) for Christmas. There I was assigned a snipers post overlooking a sunken road between German trenches and ours. You go out in the night, remain all day and return the next night in turns. A very dangerous job well camouflaged only used when necessary. During one of my spells a German scout came down the sunken road to spy, as he got opposite me he touched some bomb he was carrying, I thought they were for me and shot him, later another German came gingerly and examined his pal, looking all around. I was so nervous, felt certain he could hear me breathe so had no option but to shoot him. Nearly fifty years ago but still the cause of nightmares.

The Germans put a barrage on the position. I was shocked, concussed and evacuated by stretcher-bearers during the night and once again landed in hospital in Blighty. After a spell in England we were drafted back to France, where due to lack of reinforcements and recruits, the Brigade was reorganized into a Battalion. We originally left South Africa as four battalions of four thousand men.

As a sniper many men came to me to wound them in the arms or legs [blighties] which will take them to hospital in England to get them out of the unbearable hardships at the front. I only helped old stagers.

The Battle of the Lys, also known as the Fourth Battle of Ypres, was fought from 7 April to 29 April 1918 and was part of the German Spring Offensive in Flanders during World War I. It was originally planned by General Erich Ludendorff as Operation George but was reduced to Operation Georgette, with the objective of capturing Ypres, forcing the British forces back to the Channel ports and out of the war. In planning, execution and effects, Georgette was similar to (although smaller than) Operation Michael, earlier in the Spring Offensive.

~ from Wikipedia.org – The Battle Of The Lys

Prelude To The End...

The German plan was to attack the First Army (British), push the Second Army aside to the North and drive west to the English Channel.  This would effectively cut off the British forces in France from their supply line which ran through Calais, Dunkirk and Boulogne.

The German offensive was like a steamroller against the weakend British First Army which included several worn out formations that had been posted to a seemingly quiet sector.

On the 7th of April, the Germans opened up with a bombardment on the Allied line between Armintieres and Festubert.  The barrage continued until dawn on the 9th of April and the German Sixth Army assault, with eight divisions, broke through the line held by the Portuguese Second Division with the Portuguese withdrawing towards Estaires.

The British 55th Division pulled back its northern brigade and held its ground – more defensible than the Portugese line – for the rest of the battle, despite further attacks by two German reserve divisions.

The British 40th Division collapsed under the German attack and fell back to the north.

The German Offensive of 1918

British reserves – First King Edward’s Horse and the 11th Cyclist Bataliion were committed to stem the German onslaught but they were also defeated.

The Germans had broken through a 15km section of the front and advanced 8km, reaching Estaires on the river Lys where they were finally halted by the British reserve divisions.

On the 10th of April 1918, the German Sixth Army took Armintieres while the German 4th Army with 4 divisions attacked the British 19th Division with the Germans later advancing and capturing Messines.  The British 25th Division being outflanked withdrew.

By 11 April the situation the British found themselves in was desperate, prompting General Haig to issue his famous “Backs to the wall” order.

‘…with our backs to the wall and believing in the justice of our cause, each of us must fight on to the end’.

The British repulsed the German Fourth Army attack on the high ground of the Kemmelberg between 17 and 19 April 1918.

For Pte DJ Havenga, the 19th of April 1918 would be the last day he would see in combat…

At Wijtschate, a German aimed a bayonet at my tummy during an attack, my halfsection shot him, deflecting his thrust, but wounding me sufficiently for me to be evacuated to hospital in England.

A wonderful answer to my prayers as I had often prayed to lose a limb to get out of it entirely. 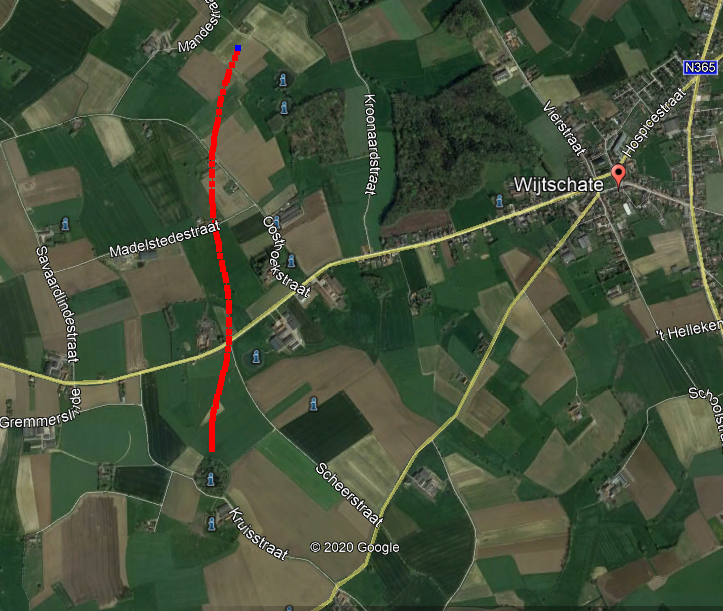 Between 17 and 19 April 1918, Located 3 km`s west of the hamlet of Wijtschate, Belgium, about 2.5 – 3 Km`s along the Wijtshate/Kemmel road, 2 Regiment occupied a line about 1.5 Km`s long. From just north of the Spanbroekmolen mine crater up to “Vandamme Farm“, which is only about 100 metres north west of the “hourglass“ craters north of Wijtschate.

Private DJ Havenga had fought his last battle in France and was now on his way to the Wimereaux Military Hospital in Rouen from where he would be placed onboard the Hospital Ship “Cambria” for repatriation to Britain.

As Duncan Price succinctly puts it in one of many notes to me: “Recall that antibiotics only appeared in 1942. In fact in WW1, as much as 70% of recovery time of patients that had been physically wounded ( ie not gassed or Shell shocked ) was due to combatting infection. Any penetration of the peritoneum would have been dangerous for this reason.“

We were in London during Armistice Day when everybody just went mad.

We were given a Free Pass all over the British Isles until our return.

In April 1919 we boarded the “Oreta” the first ship to return members of the Brigade back to the Union. As if it were yesterday, one still remembers the unforgettable welcome we received at Cape Town.

Any MOTH who visits East London will be welcome at Four Square Shellhole where we can refight the old battles.

Chapter 5
The End of WW1

Daniël’s remarkable story does not end here, he goes back home where his career with the South African Railways sees him progress to Station Master and winning the coveted Lady Duncan Trophy for the best station gardens while at Knysna in 1952.

To read more about the man who touched the lives of everyone he encountered, including his staff who loved him dearly, please continue with Chapter 7 – The Lady Duncan Trophy.