“I enjoyed it then. The designs, the interpersonal contact and negotiations, the freedom to roam the roads, the freedom to be my own boss. It was a challenge to find a solution to the many problems but I’m glad that I got out. It became too hectic.”

All this time, all large capacity transformers for Eskom had to be imported. Due to the sheer mass and size, they could not be transported over tarred roads or bridges. This meant that all transformers had to be conveyed by rail on the so-called U18 wagon which comprised of 2 heavy beams, on and between wich the transformers hung. All transformers had to be landed at Port Elizabeth as they were too big for the normal rail load profie and from PE there were no tunnels en route to their destination.

From a rail site secially chosen to be near the ultimate destination and from where there were no tarred roads or bridges to be traversed, the U18 wagon was converted into a road trailer by taking out the rail bogies and replacing them with road bogies. The Mechanical Engineers drawing office staff and I worked very closely on the design and manufacture of components for the conversio to be possible. As well of course with the trailer manufacturer.

This is the U18 rail wagon on site and work starts to jack up and “Birdcage” the beams and load. A very labour intensive task. The support truck carried 20 tons of jacks, sleepers and other equipment.

Provincial traffic escourts was another headache to arrange – timing was the problem – no cellphones to make arrangements!!

Here the load is jacked up and stable. The one rail bogie has been removed, ready for the road bogie to be added. The road bogie has built in hydraulic jacks and this will dispense with the manual side of lowering the load to the right height for road travel.

It was also necessary for the rail site to be safely away from the normal railway lines so staff could work in safety. This meant being on a loop line or siding. Then the jacking points had to be substantial to be able to support the full mass of the beams and load when jacked up to allow the swapping out of rail and road bogies. The surface also had to be flat to allow the road wheels to roll without a problem.

I had to work very closely with the Civil Engineering staff and with the Chief Engineer of Transvaal Province, a Belgian by the name of Mr Luyckx. I was very fortunate – he was very helpful and always obliging with later projects too!

Goedbeloon farm near Grootvlei cost me many days of slog – to locate a site which was suitable in all respects. It was not the first such changeover site but it was the for this, the heaviest ever transformer, up to that time. There were 5 such transformers for Eskom’s Atlas Distribution Station near Vereeiniging and they were built by General Electric in England.

As it happens, the first transformer “blew up” on comissioning and had to be returned to England for repair.

It takes hours to get the job done. Progress is slow in the hot sun but fortunately the staff have worked together for a long time and know the drill well.

The load and beams are on their own waiting for the road bogies.

The “Top Brass” are pleased.

The pictures show the conversion at Goedbeloon. The beams weighed 34 tons making the weight on each bogie 101 tons, or 202 tons total load. (184 metric tonnes) As this was the heaviest load at the time, there were many top brass present. My Chief Engineer, Automotive, Dr Jan Joachim Burger, Harry Simpson, Chief Superintendent Road Transport, African Mirror – the Cinema News Movie Makers and thethe Railway Publicity Department.

The negotiation with the farmer to use his land and to have a road of hardstanding graded, for this load, to the nearest provincial gravel road went smoothly. He was very happy to oblige at no charge just so that he and his farm could have a moment of glory.

The negotiations with all concerned was well as the clearing agents and Eskom took virtually years to finalise. All went well and it was a huge feather in my cap. In fact, all the loads I arranged were major accomplishments and I was flown all over the country to look at sites and give opnions on transporting abnormal loads.

One set of road bogies is in place and is being secured to the bolster. This was the first load of this mass – would my design calculations for the equipment prove strong enough? My nerves were on edge. We’d know soon enough and any problem would be shown to the whole of South Africa on African Mirror!

Almost ready to roll, the whole abnormal load is just about ready to pull off.

Here we go! Each bogie has 24 wheels. With the load mass, mass of the beams, and mass of the bogies, each tyre is carrying nearly 5 tons. All wheels are supported on hydraulic cylinders intorconnected on the sma hydraulic circuit so that the hydraulic oil pressure is the same on all cylinders and the load is equalised on all the wheels.

Changing a flat wheel on the inside is a major job. Only new tyres are used and their capacity is much more than necessary.

From the other side and rolling…

The cabs on the back of the hauling vehicles were built on a base of 10 tons of steel. This was to give traction to the driving wheels and to stop them from spinning. Old railway track was used as the base!

The cabs had built in bunks and all the necessities for the drivers to stay on the road for days at a time as they were only allowed to travel after sunrise and before sunset.

It was only possible to use dirt roads in the laden configuration.  After offloading the transformers, the beams which belonged to the U18 rail wagon had to be returned to the rail wagon.

A “short” job like this could take a few days.  Getting to site, converting, delivering, returning to the rail site, building up the U18 and then only returning to depot.  Nevermind all the manoevering on the site and offloading!

The farmer watches in awe!

The abnormal load disapears into the distance. Note the drawbar onthe back bogie. If necessary, the hauling vehicles could be coupled to haul the trailer in the opposite direction.

The drivers were amazing. They were hand picked not only for their driving ability but for compatibility as well. Each vehicle had two drivers so that they could have frequent rest periods. They drove and lived and cooked and lived together for days on end. 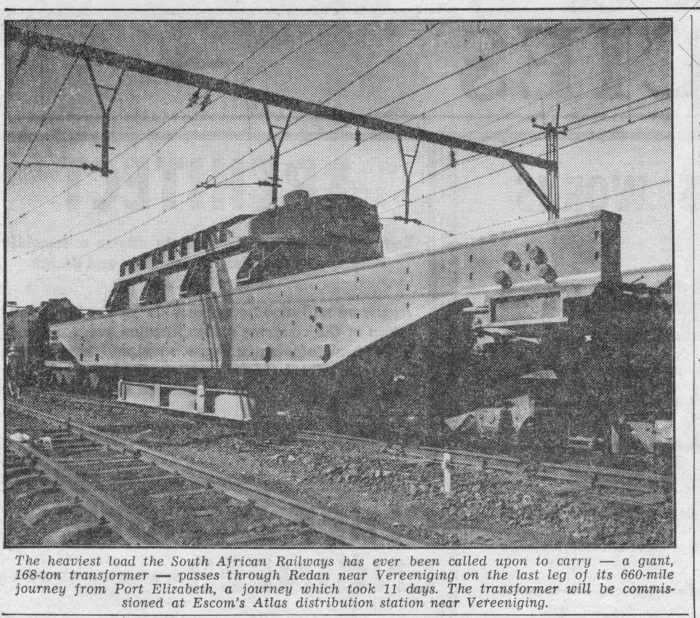 The newspaper cutting says it all.  My team and I had delivered again.

Years of planning, blood, sweat and tears had all come to fruition with everyone satisfied with the outcome.

Job satisfaction abounded with jobs completed satisfactorily like this one.

Still interested? See part four - "Ammonia Tower" for the next set of photographs