Going over the top to take the Butte de Warlencourt, Winter in Arras, wounded in action at Arras.

Bernafay Wood at the bottom left of the map.  Image from Google Earth.

The Germans attacked the trenches to our left and forced a wedge, so in broad daylight with practically no artillery preparation we had to go over the top to take the Butte, this was an impregnable fortified zone from where the enemy mowed us down like wheat with their machine gun, rifle as well as severe artillery fire.

There I had one of those heartrending happenings one never forgets. 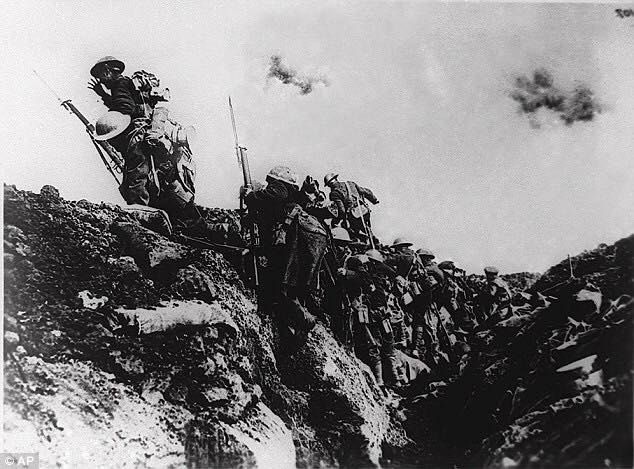 Harold was my halfsection. On service, halfsections get closer to one another than brothers. Before going over the top the troops are lined up in the front line, facing the enemy practically shoulder to shoulder.

In places the trenches are high without fire steps, one has to clamber up and over, by now one is so nervous that it is not so easy. Harold and I clambered up, he put his hand on my shoulder to lever himself up which made me fall back into the trench, he quickly bent down took my hand drawing me up with all the force he could muster, a final jerk at the top made me fall flat on my tummy.

Just then a wizzbang shell fell where I had been, covering me with dirt, blood and human flesh from my halfsection who had just saved my life…

Again one advanced in a trance and ignored all the shells mortars and shrapnel bursting also the dead and wounded all around.

We reached our objective. The other sections were not so successful, their objective being the actual “Butt”. We saw wave after wave attacking it and being mown down like wheat.

Our action frustrated the Germans in their assault in the other section hence their counter attacks on us.

The ground was too hard to consolidate so we had to use shell holes to operate from.

Note:  The image does not show the South Africans digging in but illustrates the use of shell holes.

We endured this without food except emergency rations taken from the dead and only slept standing up until we were relieved after 3 days having lost about 60% of our men killed or wounded, we were sent to billets to reorganize, await drafts from South Africa and the return of previously wounded who had recovered.

We old stagers were sent to Vimy Ridge to tunnel under the German lines where craters would be created by using ammonel and other explosives, when this happened there would be a terrific battle for the crater because it would command miles of territory in every direction.

From this rest we were transferred to the trenches at Arras apparently for the winter early in December 1916. After all our other fighting Arras was quiet except for intermittent raids when prisoners were collected. If these were Saxons we knew it would remain quiet but if Prussians we knew there was something on the go.

This was our first winter in France and it was unbelievably cold. In reserves we could make use of dugouts and make fires therein there was plenty of wood and Arras had a smashed candle factory which provided the grease but the smoke was suffocating us as dugouts have no ventilation.

In the front line trenches we could not use any cover, it often snowed, we used to sit and rub one another’s feet for circulation, in the daytime take off our clothes and de-louse them. One of our biggest hardships throughout the war was lice, ones clothes were always massed with them, the billets everywhere, mostly stables with straw were covered with the pests but one was always so weary that one endured.

The billets were never cleaned or fumigated. Rats were also very troublesome they lived mostly on corpses, it was not uncommon to see rats running around with pieces of human bones and flesh, labour parties used to go out practically every night to bury the dead but as fast as the corpses were dragged into the shellholes just as fast were they churned over by shellfire.

I was in charge of a Lewis gun section when one morning a spying pilot in a plane flew perilously low apparently taking photographs of our positions, he was so low his face could be plainly seen so we made several bursts of the Lewis gun at him and we all cheered to see him come down right in the German barbed wire.

Note: Image not of South Africans but used to illustrate the type of weapon and trench.

That night the Germans fired over a score of minenwerfers, trench mortars with terrific explosive power, which left craters in which an ordinary bedroom could be hidden, on our position.

We were stunned, shocked, concussed, blown from pillar to post, buried with muck and only extricated ourselves with difficulty.

Five of the seven men of the gun section were never subsequently found.

Early in April we were given pieces of ribbon material to sew on our tunics when we knew the next push was imminent. By this time all badges had been done away with, material was sewn on our clothes to show which company or regiment we belonged to.

So on the 7th April 1917 we went over the top at Arras with a very thorough artillery barrage , most of the Germans we encountered were corpses, the whole earth shook and trembled, the noise of the bursting shells was terrific, the whole of the British lines were on the assault.

We reached our objectives that afternoon and started to consolidate our positions to withstand the counter attacks. It was rumoured that the calvary was to follow us, unfortunately it started snowing which prevented any movement of mounted men, the barbed wire and shellholes all being covered with snow.

From the website of the 51st Highland Division, Pte MacPhearson's Diary.

On the 11th we again attacked, our battalion’s route led through a village called Fampoux, all the houses had been shattered but the German defenses were now consolidated in these houses from which they were sniping at us.

Our way led down a sunken road, which we had to negotiate due to the obstacles of the broken down houses.

The Germans put down a barrage of shells on this sunken road, which caused heavy casualties amongst us, I was also wounded in the knee and head and lay unconscious in the snow, and it was only due to my youth that there was any recovery.

The image below is from N0. 8860, Pte Havenga DJ’s official records as held by National Archives, Cape Town, South Africa.

At some point after the action at Arras and Fampoux, Pte DJ Havenga started recieving parcels of goodies from South Africa.  Grandpa was not comfortable with accepting them as they were not for him and took it upon himself to write a letter to the Mother and Father who had just lost a son in battle.

He told them in the gentlest possible terms that he could not accept the packages addressed to Antonie Johannes Daniel Havenga as he was Daniel Jacobus Havenga and not their son.  Their response was to tell him it was OK and that he was now their son as well and that he was to enjoy the treats…

Daniel Havenga resided in Port Elizabeth and was an apprentice in SAR fitters workshop. His probate lists him as “John Daniel“.

Killed in action on 12 April 1917 aged 21, he is one of 22 South Africans buried in Browns Copse Cemetary in Roex, France.  Rest In Peace.

Thank you for for your service, you shall never be forgotten.

Pte Havenga was treated at the 7th Canadian General Hospital on 13 April 1917 and evacuated from there to Newhaven, England on 19 April 1917.

From his records it appears he was declared “Fit for Duty” sometime in late September 1917 and embarked at Southampton  on 24 September, arriving back at the front and rejoining his unit on 4 October 1917.