“I enjoyed it then. The designs, the interpersonal contact and negotiations, the freedom to roam the roads, the freedom to be my own boss. It was a challenge to find a solution to the many problems but I’m glad that I got out. It became too hectic.”

The Natal South Coast was still a long way off when disaster struck.  Vecor, the manufacturer, undertook to provide the cradles on which the tower would rest during transportation.  These were bolted to the bolster atop the road bogies.  On the date of transport, we were all set to go.  As the drivers exited the factory and applied brakes to proceed slowly into the main road, the front cradle collapsed.  The noise was heard all over Vanderbijlpark and I got the fright of my life.  They made a new cradle within 23 hours and we were set to roll again the next day.  The first delay…

Just manoeuvering back into vecor from this position was a major undertaking.  Thank goodness the tower did not fall off the bogie or get damaged.

I wonder who the guy was that took the photogrph and reatreated in such a hurry.

We had a specific route to follow in Natal, where only the back roads were permitted.  The route was via Muden in the Natal Midlands.  It took a long time and caused more delays.

When in Muden I bought a few bottles of their famous orange wine.  I wonder if they still make it there?

The journey which was scheduled for 2 days eventually took us 5 and we arrived at the site in Umbogentwini too late for offloading on the Friday.  I had travelled down in the escourt car and in the cab with the drivers and had to chatch the train home to Johannesburg.

Looking for a place to pull off the road before sunset!

When surveying possible routes for loads like this to traverse, a Tapley meter to measure gradients, camber and brake retardation forces, was standard equipment.  I knew the roars from Randfontein to Springs so well and when we did construction and thermo equipment (boilers and turbines) for the Eskom power stations around Ermelo, Camden and others, these roads became second nature to me too!

When we travel the roads in our motor cars, we appreciate the camber which aids the steering of the car.  For the drivers of these huge abnormal loads, the sheer length and height of the loads caused nightmares on heavily cambered roads.  Progress is slow.  Safety is paramount.  Fortunately for me, I never had a roll to contend with.  Checking of center of gravity and roll angles was all part of the preparation – as was checking the drawbar pull and gradeability of the hauling vehicles for steep inclines when hauling heavy loads.

Note the staff walking in front and at the rear of the load.  Safety first, every time – all the time!

Nothing can be left to chance – there could never be a second chance if this load rolled over!

The driving staff had to lay over for the week-end and were not happy. 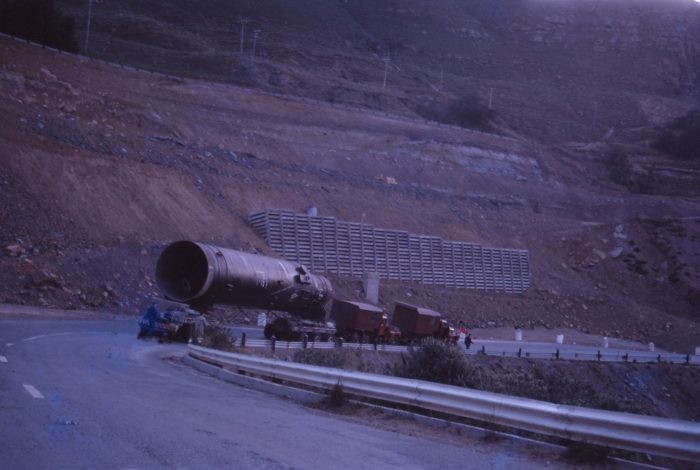 I managed to get a seat on a train home and found myself in a compartment with a Scot who was a mercenary in the Congo during their civil war.  He was a big block of a guy and dressed in his ceremonial kilt.  He recounted stories of the action in all its gory detail and of course – his own preferred way of dealing with the enemy.  He said that he lived one day at a time – and that just had to be true!

Still interested? See part five - "Scrubber Tower" for the next set of photographs